It's been too long since my last entry, but this morning's snowfall has inspired me to put some thoughts down.

The snow is falling heavily here, in fat wet flakes, sticking to branches and bushes and making a beautiful white blanket over the land. I'm inside now, but this snow reminds me of the times when I was able to be out in the falling snow.
One time that sticks in my mind happened during high school. I was on the track team of my rural-suburban high school, and we used to run the back country roads for training. We went out in all weather. One afternoon of a day of heavy snow (we never closed for snow in upstate New York), we were out running on a farm road not far from school (yes, a real farm road, with a cow farm at one end). The road was very curvy, and you could see only a short distance ahead before the road disappeared around the bend. The snow further diminished the visibility. I was running alone, as usual (I was among the slowest on the team), and as I ran along that road, with the snowflakes falling fast around me, I found myself in a small world of silent and puffy whiteness. It was like being in a cloud, and the sense of being alone and yet connected with the rest of Creation was very strong. It was an awesome feeling.
Another time occurred many years later, when I was living in Missouri. We had a heavy snowfall, and the office was closed. But the roads were passable, so I drove to Shaw Arboretum, a large "garden" a few miles outside of St. Louis, to walk around and enjoy the weather. The path through the woods was difficult to follow, and the snow was deep, but it was amazing being alone in the "wilderness" in the middle of a "blizzard." Again, there was an enormous sense of being completely alone yet also that feeling of being part of something grand, of being at one with the trees, with the snow, with the universe. A real sense of being Alive! 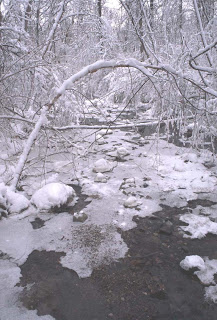 I guess these are two examples of the spiritual tensions I often feel. On the one hand, this drive to be an individual, to be myself, to be noticed as separate or as unique. On the other hand, this desire to be connected, to be part of something much bigger than myself. I experience these tensions as part of daily life, whether at work, in my relationships with my family, at church, or simply in the noisiness of my own mind. I think I need both extremes somehow, even though the "conflict" can be exhausting sometimes.
Do other people experience this tension? I'd be interested in reading about your experiences.
Blessed be,
Anthony
Posted by Anthony F. Chiffolo at 10:42 AM