A few years ago, Rusty and I took a vacation trip to Las Vegas. As a break from the glitter and gambling, we decided to try a few adventures. We went to a gay rodeo (where Rusty saw someone he knew!), we visited Hoover Dam, and we drove to the western rim of the Grand Canyon. I had never been to the Grand Canyon and had always wanted to go; Rusty had been, but to the southern edge, not the western. So we really had no idea what to expect.

It's probably a good thing, because had we known, we might not have tried it, for we had to drive for several hours across the empty (and I mean empty!) desert just to get to the American Indian reservation, where a dirt road led us many more really bumpy miles through scrub brush and over flash-flood ditches and up and down roller-coaster hills. After more than an hour of bone-jarring driving in our (somewhat reliable) compact rental car (it was a little like being in a horse-drawn farm wagon--we couldn't go very fast at all), we began to see the multicolored walls of the Grand Canyon. More uncomfortable miles than we anticipated finally brought us to the rim, where we could walk right up to the edge of this glorious spectacle. The Canyon is absolutely huge, so deep that we were standing above the flight of the hawks, and so wide that we could only imagine how many dozens of miles across. The desert air was so clear that the colors were almost unreal--reds, oranges, purples, yellows, browns, blues, in amazing combinations. And it was incredibly quiet, our conversation being swallowed up completely by the grand silence. Of course, I took a lot of photos, but I think they're unsatisfactory portrayals of this special place--as is this word portrait.

After a time there, we began to notice the lateness of the hour, so we examined the map and determined to return by a different route--hopefully, one that was paved. Off we went, but what seemed like only a quarter inch on the map was really a three-hour drive across the reservation! And we didn't see a single person all that way (though we did encounter some very large elk and some very quick jackrabbits). It was dark before we got to the highway. We had been worried, but at least we hadn't run out of gas. 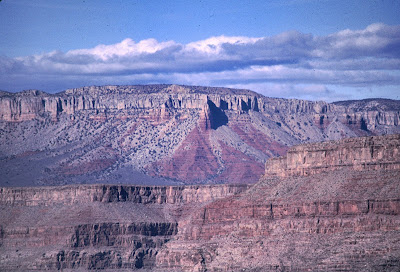 Like many people, I sometimes wish I could see into the future, perhaps to avoid difficulties, but more than that, to be able to prepare myself for what lies ahead. Yet there is a definite downside to knowing what is to come. Had we had foreknowledge of the rough ground we would have to cover to get to the Grand Canyon, for example, we might not have undertaken this adventure at all--we weren't properly provisioned, attired, or wheeled--and we would have missed experiencing one of the most beautiful places on the planet.

Often, I worry about the hours and days before me, rehearsing alternatives and possible scenarios and outcomes and wishing I could see into the future. But the time I spend worrying is really a complete waste--I'll never get those minutes back, and anyway, next week will arrive inevitably, in a form I never would have envisioned. One of the great gurus said to his students, "Give your entire attention to what God is doing right now, and don't get worked up about what may or may not happen tomorrow. God will help you deal with whatever hard things come up when the time comes" (Matthew 6:34). Can I give my entire attention to this present moment, putting myself in synch with the Universe, allowing the Spirit to lead me wherever and however it wills? That's a tough one for a control freak (me!), but maybe that's the only way to paradise.

Besides, who knows what other Grand Canyons might be waiting at the end of another long and bumpy road?