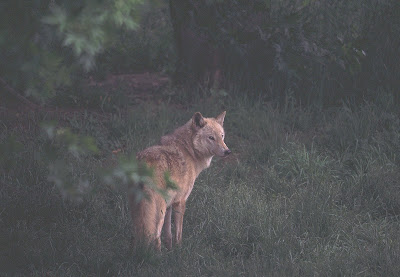 I took the accompanying photo on my second visit to Wildlife Prairie Park in Illinois. Nothing unusual about that, but it was actually the second full day I spent at the wolf enclosure there. I might try to convince myself that the wolves began to accept me as another member of their pack, but it's more likely that they were so used to human traffic (or so focused on the neighboring elk and bison) that they never noticed I had returned for another eight hours with them. They were simply going about their wolf lives as normally as possible, following a routine that had become comfortable.
I, however, had stepped outside of my daily routine to visit the park, and I made the deliberate decision to spend as much time as I could with the wolves. Not only did I enjoy their company, but I also became familiar with their activities, their personalities, and their interactions. I was able to observe the details of their eating, drinking, running, hunting, playing, and sleeping, and I believe that my photos were better able to capture their essence as a result.
What worked with the wolves works for many other animals (elk, bison, turkeys, geese) as well, and it works for locations too--the more often I walk the trails of a certain park, the better I know that park's distinctive personality, the better I can envision what to expect, and the better (i.e., more true) my photos are. I believe the same principle applies to our human relationships, for the more time we spend with a person, the better we know her or him. I guess it's a matter of connecting with the spirit--of the wolves, of the park, of my companion--a connection that perhaps requires "time in" more than anything else.
Maybe we're deliberate about putting in this time, or maybe we're unconsciously filling a sensed need. It's easy to see how this might happen with our friends or family members, and they can give us cues to clue us in.
Sometimes the universe can send us clues too, signs that we need to reconnect with the Spirit. We might feel anxious, exhausted, overwhelmed, irritable, without knowing exactly why. For some people, such feelings indicate the need to "recharge our batteries"; others might say we've lost touch with our inner truth; still others might believe that we've allowed something to block our vision of God. Whatever metaphor one might use, the need to put "time in" with the Spirit remains.
How we do that is a very personal decision. Whereas one person might meditate, another might nap, and still another might listen to music, or read a poem, or watch the flowers grow in the garden. And some souls, like me, might even go visit the wolves.
Posted by Anthony F. Chiffolo at 1:55 PM