A number of years ago, I spent many evenings along the shores where the Severn River meets the Chesapeake Bay. My intention was to photograph the evening sailboat races, which proceeded out into the bay and finished in Annapolis. I managed to capture a few decent shots of the sailing vessels, but the boats were generally too far offshore during the bulk of the races, and the light had generally failed by the time the sailboats returned to harbor.

One evening, the boats were particularly slow getting to the finish, for the wind had been very light and erratic. I was trying to be patient as the sun set and the light diminished, but after a time I realized there was no use waiting any longer. As I was beginning to pack up, I happened to look overhead--and there I saw a small wisp of a cloud, with a beautiful rainbow illuminated by the final rays of the sun. All of a sudden, I was snapping pictures of the most amazing cloud formations! The colors were brilliant, and the shapes were fascinating--nature was painting some of the most breathtaking abstracts I have ever seen that evening. 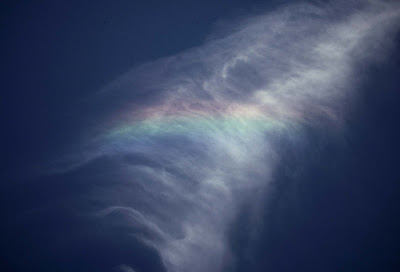 That experience taught me to be more flexible in my photographic endeavors, that it's important to remain open to the images that are present, even if they're not the ones I was hoping for or expecting, and to allow myself to see what's actually there in front of me. It's an ongoing lesson, and one that applies to my spiritual life as well. If my expectations or preconceptions limit what I might allow the Divine to reveal to me, what breathtaking revelations might I end up missing?
Posted by Anthony F. Chiffolo at 3:29 PM