Shrine of the Book, Dead Sea Scrolls, and Model of Second Temple Jerusalem 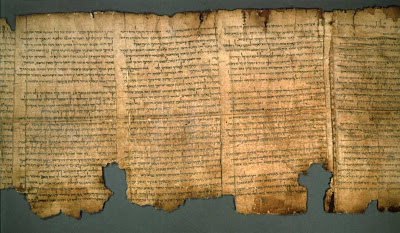 Some scientists conjecture that religious belief is the main characteristic that sets humankind apart from other animals. From the earliest days of human society, one of the most important parts of religious ritual was the telling of stories. For millennia, stories about the creation of the world, the activities of the gods, and the origins of groups and their traditions were recited by one generation to the next, and the stories changed in the telling. The recording of these stories is a relatively modern event in human history, for "writing" did not become widespread until sometime in the 4th millennium B.C.E., with the need to record commercial transactions (though people used symbols much earlier). Though early "writing" was highly pictographic, it enabled societies to begin to "fix" their stories in a form that could pass unchanged through the generations. The first alphabet emerged in Ancient Egypt about 1800 B.C.E., and it is possible that the Israelites learned writing while they resided in Egypt--or even that they may have helped the Egyptians develop writing. 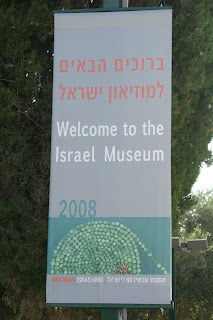 It is uncertain when the sacred stories of the Israelites were inscribed onto scrolls--one must remember that, according to tradition, many years passed between the time the Israelites escaped from bondage in Egypt (perhaps in the 1300s B.C.E.) and the time King David united the peoples into a great kingdom (perhaps some time around 1000 B.C.E.), maybe the first opportunity for a stable Jewish society in which writing could flourish. It was during this First Temple Period that the Jewish people began to shape their ancient traditions into holy scriptures.

In about 586 B.C.E. Babylon conquered the kingdom and took the Jews into exile again; though they began to return to Jerusalem about 50 years later, it was not until 450 B.C.E. that the "Men of the Great Assembly" first compiled the contents of the Tanakh (the five books of Moses [also known as the Torah or Pentateuch], the books of the prophets, and other writings). The process of compilation continued, and by the 1st century B.C.E. the "canon" of the Hebrew Bible had been determined. Other people in other lands had undertaken the task of recording their stories and religious beliefs, but the Jews became known as the People of the Book because of their adherence to the laws set forth therein.

Thus the background to the construction of the Shrine of the Book in Jerusalem. When the Dead Sea Scrolls, the oldest biblical manuscripts, were discovered at Qumran in the Judean Desert beginning in 1947, certain scholars and Israeli nationalists conceived the idea of building a museum where people could view and study these scrolls. The museum was finished in 1965, funded by the family of David Samuel Gottesman, the philanthropist who had purchased and donated the scrolls to the state of Israel. Part of the Israel Museum, the shrine is actually built mostly underground, topped by a white dome that symbolizes the Sons of Light and abutting a black wall that symbolizes the Sons of Darkness. 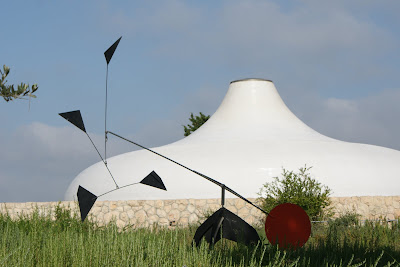 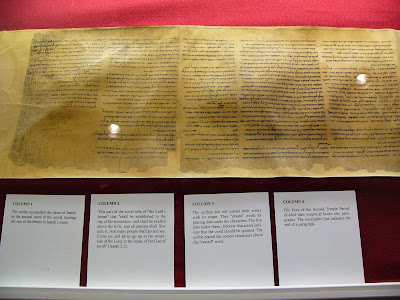 Inside, the exhibits are very dimly lit, to protect the fragile scrolls from the harmful effects of light (because photographs are prohibited, I picked these particular images up from other websites). And only one scroll is on display at any one time, the rest being stored in climate-controlled "vaults" (after all, they were preserved because they were buried in cool, dry, dark desert caves for hundreds of years); visitors can view facsimiles of those originals not on display.

When we were in Jerusalem, we were fortunate because our visit coincided with the display of the Great Isaiah Scroll [see my previous blog posting], wrapped all the way around this large representation of a scroll: 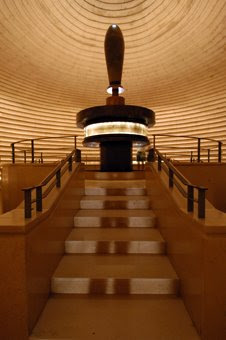 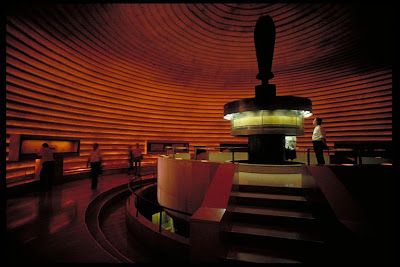 Another rare and special manuscript found in the museum is the Aleppo Codex (I don't have a photo of it, unfortunately). Written by Masorete scholars in Tiberias in the 10th century C.E., the Aleppo Codex embodies centuries of traditions with regard to pronunciation, spelling, punctuation, and cantillation. It is known as the "Aleppo" Codex because it had made its way to Aleppo, Syria, from where it was smuggled back to Jerusalem in the 1950s. Many Israelis believe that the exhibition of the Aleppo Codex in the Shrine of the Book is a a fulfillment of Isaiah's prophecy: “For instruction [Torah] shall come forth from Zion, the word of the Lord from Jerusalem” (2:3). 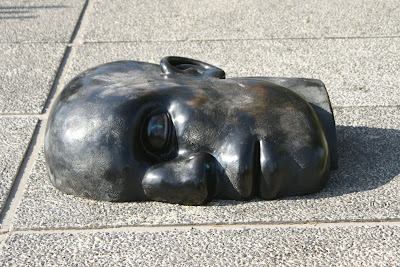 Outside the building is a peaceful sculpture garden. These are some photos of the gardens and sculptures, both modern and ancient (since this is part of the Israeli Museum, there are a number of antiquities on display): 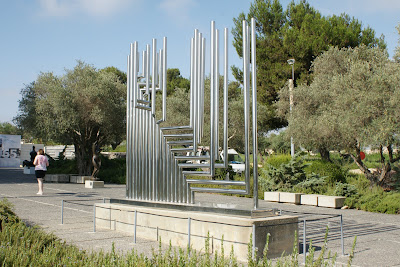 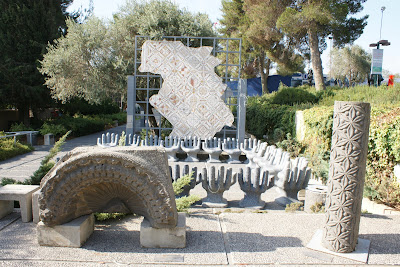 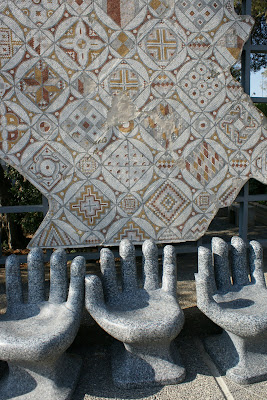 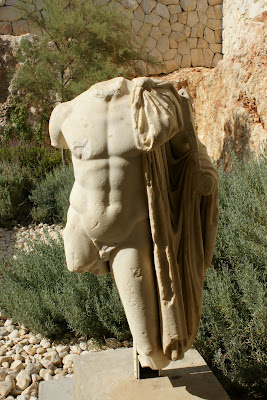 Nearby the Shrine of the Book is the Model of Second Temple Jerusalem. It is a fascinating and beautiful 1:50 scale model (occupying 21,500 square feet) that displays ancient Jerusalem's palaces, homes, courtyards, gardens, theater, and markets, as well as the Temple and Temple Mount complex. The model was originally built in 1966 and moved to the museum in 2006. Visitors can circumnavigate the city and view it from above, coming to understand what the ancient sages said about Jerusalem: “Ten measures of beauty were given to the world; nine were taken by Jerusalem.” 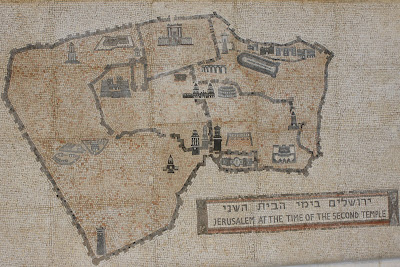 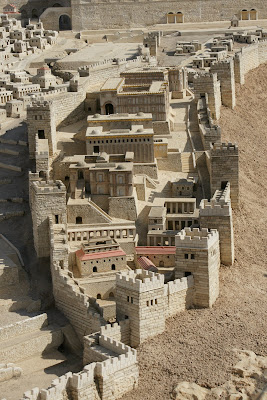 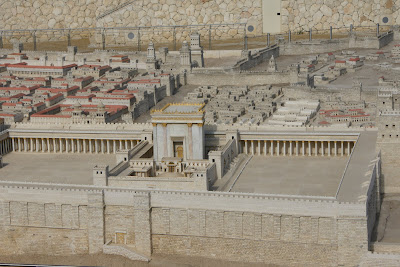 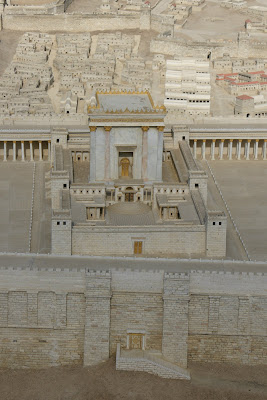 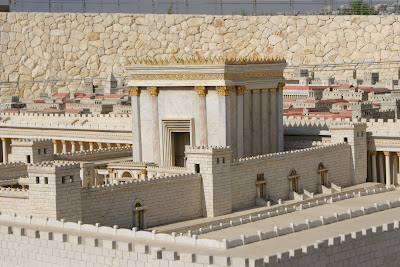 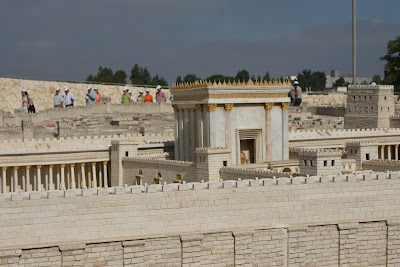 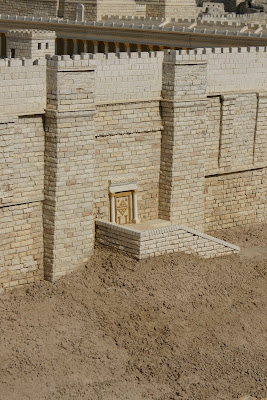 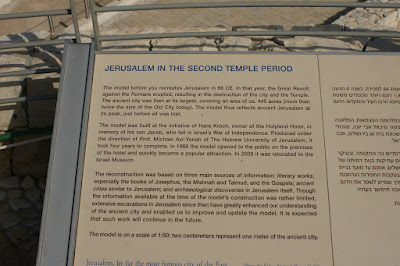 Our visit to the Israeli Museum was quite a learning experience, and another of our extraordinary encounters with the ancient cultures of the Middle East.
Posted by Anthony F. Chiffolo at 2:29 PM