The first city we visited (yes, I know, my presentation of our trip in this blog is out of order) was Tel Aviv. The second largest city in Israel (by population), Tel Aviv is located on the coast of the Mediterranean Sea, just north of Jaffa. Founded in 1909, Tel Aviv is Israel's economic center (and home of the Tel Aviv Stock Exchange), with many upscale shopping areas and restaurants, a very secular lifestyle, and major cultural and performing arts centers--not to mention a beautiful beach!

The name Tel Aviv is Hebrew for "Hill of Spring"; literally, tel is an archaeological site, and aviv means spring renewal or rebirth, so the name that the Zionists gave to this city symbolized their dream for a reborn Jewish homeland--a dream that eventually came true with the granting of Israeli statehood in 1948.

Tel Aviv is also home to the White City, a collection of 4,000 Bauhaus buildings, the largest of any city worldwide. When the Nazis closed the Bauhaus school in Germany in 1933, many Jewish architects fled to Palestine to join their compatriots who had already immigrated to Tel Aviv in the 1920s. These architects took advantage of the absence of established building conventions to begin building in the Bauhaus tradition, which emphasized functionality and inexpensive building materials. Of course, the style required adaptation to the extremes of the Mediterranean and desert climate: white and light colors to reflect the heat; walls to protect against the sun; small recessed windows to limit the glare; long narrow balconies, shaded by the balcony just above, to catch the sea breeze; flat roofs to provide a common area where residents could gather and cool off in the evenings; pillars to elevate the buildings and allow wind to blow beneath and cool the apartments; garden plots among the structures to encourage self-sufficient agriculture. Despite these innovations, the concrete buildings still become extremely hot during the summers, so the residents of Tel Aviv adopted the Mediterranean custom of strolling in the parks in the evenings, a custom that continues to this day. UNESCO proclaimed the White City a World Cultural Heritage site in 2003, "an outstanding example of new town planning and architecture in the early 20th century."

These two photos show the view of the beach from our hotel--it was a relaxing way to begin our visit to Israel and to rest from our flight before heading out on foot to tour the environs. 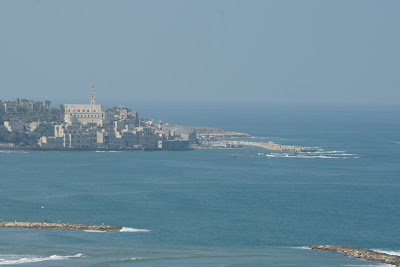 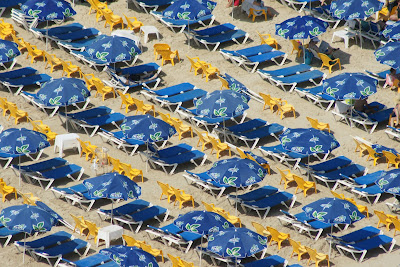 Tel Aviv's importance to modern Zionism cannot be understated. As a political secular movement, Zionism really began with the Austro-Hungarian journalist Theodor Herzl in the late 19th century, who encouraged Jews to migrate to Palestine. Zionism has two pillars: religious tradition, which provides a link between the Jewish people and the Land of Israel, or the Promised Land; and secular nationalism, which seeks a homeland where Jews can be safe from antisemitism. Zionism was but one of many Jewish political movements in Europe but became the dominant one after the Holocaust. Since the 1st century C.E., most Jews have lived in exile (having been forced out of Jerusalem/Judea by the Romans)--an event known as the Diaspora. In 1800 only 6,700 Jews lived in Palestine--about 2.4% of the total population. Jewish immigration to Palestine really started in earnest in 1882, with several aliyahs, or waves, occurring until the largest influx in the 1930s and 1940s, despite Britain's efforts to control the numbers of Jews allowed into the British mandate. By 1947 the Jewish population of Palestine was 630,000--about 32.5% of the total population. A remarkable change in just 150 years.
-----
Our recollection is that this next photo shows Ben-Gurion's house. David Ben-Gurion was Israel's first prime minister, serving from 1948 to 1963 (except for the two-year period in 1954-55). Born David Grun in Poland in 1886, Ben-Gurion was an ardent Zionist who immigrated to Palestine in 1906. The Ottoman Turks expelled him for his political activities in 1915; so he went to New York City, where he married and had three children. He joined the British Army in 1918 as part of the Jewish Legion, and he and his family returned to Palestine after Britain captured it from the Ottoman Empire. In 1920 he became general secretary of the Histadrut (Zionist Labor Federation in Palestine); in 1930 he provided leadership for the formation of Mapai, a right-wing Zionist labor party; in 1935 he became chair of the executive committee of the Jewish Agency for Palestine; on May 14, 1948, he declared the establishment of the State of Israel. He became prime minister and also oversaw Israel's military during the 1948 Arab-Israeli War (known to Israelis as the War of Independence or the War of Liberation; the Palestinians call it the Catastrophe). After stepping down as prime minister, he remained active in politics, retiring to a kibbutz in the Negev Desert in 1970. (This is just a small bit of the important history that has transpired in Israel in modern times.) 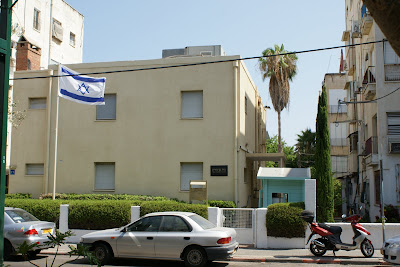 Another important landmark in Tel Aviv is Rothschild Boulevard, named after baron Edmond James de Rothschild, a French member of the Rothschild banking family who actively supported Zionism and donated significant funds to support the early movement. The first boulevard built in the city, Rothschild Boulevard is perhaps the busiest street in Tel Aviv and also is central to the White City. Independence Hall, the site of the signing of Israel's Declaration of Independence, is located on Rothschild Boulevard.
Like much of Israel, Tel Aviv has not escaped political violence. In recent years, suicide bombers have attacked buses and nightclubs in Tel Aviv; here is one of the memorials to the civilians killed in one of the suicide bombings: 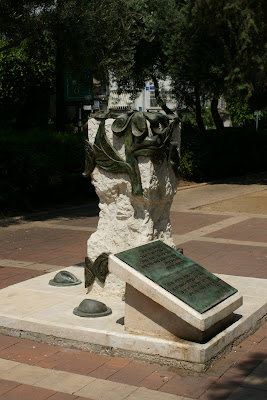 Israeli politicians have not been immune from violence either, and Tel Aviv is the site of one of the saddest events in Israeli history. 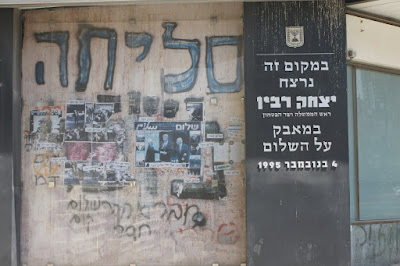 On November 4, 1995, Prime Minister Yitzhak Rabin appeared at a rally in support of the Oslo peace accords, held in the outdoor plaza named Kikar Malchei Yisrael (Kings of Israel). After the rally, as he was walking toward his car, he was assassinated, gunned down by Yigal Amir, a right-wing Orthodox Jew who strenuously opposed Rabin's peace initiatives and signing of the Oslo agreement. The plaza has been renamed Rabin Square, and the location is marked by a memorial to Rabin's memory and to the continuation of the peace process. 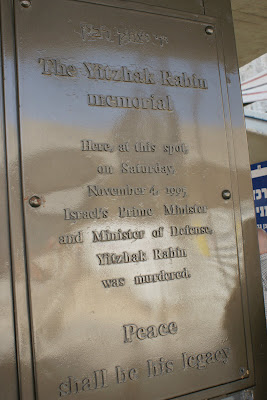 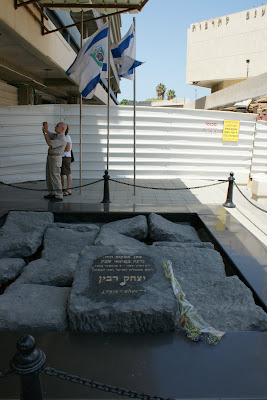 Upon the stone marker, one can see that a passerby has placed a smaller stone, in remembrance of the deceased peacemaker. 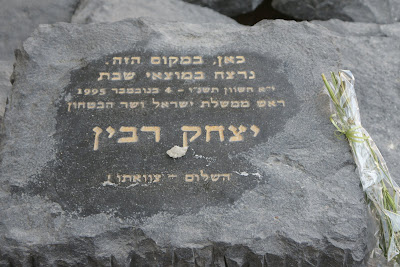 As a major cultural center, Tel Aviv is home to a number of modern art masterpieces. For example, Dizengoff Square is centered on a splendid outdoor fountain designed by Yaacov Agam, an Israeli sculptor and experimental artist known for his abstract and kinetic pieces. Here are some views of his fountain: 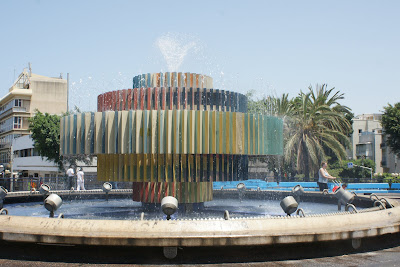 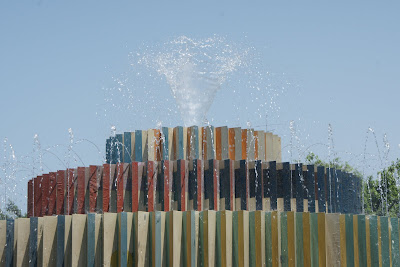 Although Tel Aviv did not seem as modern as I remember it from 1983, it's still an incredible city, and it was a comfortable place for us to ease into the unfamiliar world we were about to encounter.
Posted by Anthony F. Chiffolo at 3:18 PM