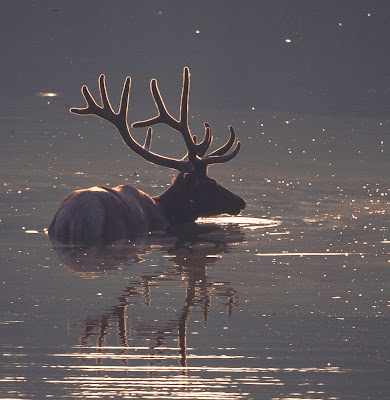 When it's 110 in the shade, most people nowadays decide to enjoy air-conditioned activities, but as I've written before, photographers are sometimes an entirely different breed. So one HOT summer evening found me hiking solo (and sweating profusely) around the local park while everyone else was inside with an iced tea. And indeed, I must have been the ONLY soul out and about in the forest--even the elk had taken a dip in the lake to cool off!
I guess I didn't know much about elk, so I never expected to see them swimming, but there they were, including the largest bucks with the enormous racks of antlers. And what a magnificent sight it was! The sun was low in the sky, so the light was that special "golden" tone that photographers love and was sparkling off the ripples in the water. Because the elk were still in velvet, their antlers were glowing too, as if they were "gilded with light."
Once again, I can say that following the difficult path paid off for me. I think the photographs captured the moment pretty well. Of course, the images I have in my mind are more vivid still. 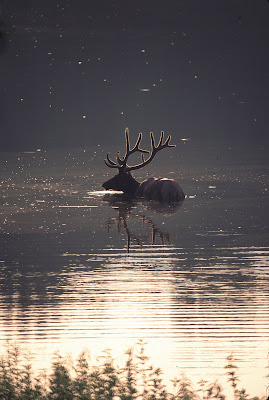 Some people claim that they can actually see auras, the energy fields that every living person supposedly produces. I myself have never seen an aura, and I don't know if I believe in them, but if they do exist, I would imagine them to appear very similar to the "glow" that I observed around the elk that sweltering but golden evening. 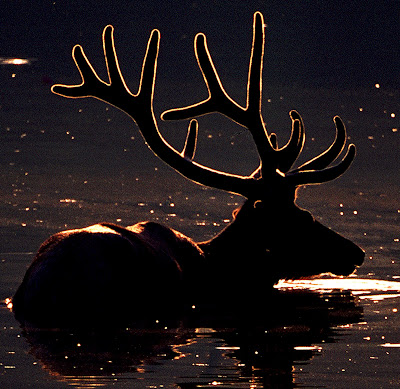