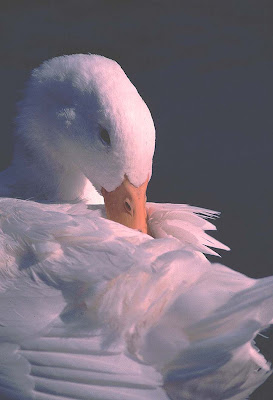 I don't know if bees do it, but birds (or at least ducks and geese) do. So do cats, dogs, chimpanzees, and many other mammals. Anyone who's ever been to a farm, a zoo, or a pond or ever seen a nature show knows it's true. And while it may seem contortionistic or perhaps, in some sense, "gross," it's a necessary survival mechanism.
I'm talking about the art of "grooming." Ducks, gulls, swans, geese and other water birds "preen" to evenly distribute the oils that make their feathers water-resistant, cold-resistant, and buoyant. Songbirds clean their feathers to remove any dirt or debris that might interfere with flight. Cats and dogs will lick their own fur to remove dirt and old, dead hair. Baboons and other primates take the art one step further, making grooming an act of cleanliness (removing insects, fleas, or lice, for example) and an act of social bonding. Instinctively, these animals know that even in the mildest of climates and most benevolent of habitats, they must care for their bodies if they are to survive.
As members of the "animal kingdom," human beings are no different. Over the course of history, we have discovered that certain grooming habits can make life more pleasant for ourselves: for example, brushing our teeth regularly can help prevent toothaches, gum disease, and other painful conditions. And we continue to learn, and teach our offspring, more and more about taking care of our own bodies.
But as many people believe, we humans are also spiritual beings and thus need to pay as much attention to our spiritual grooming as we do to our physical care. For some, this is not an odd concept: prayer, meditation, quiet times are routine parts of life, allowing the individual to connect with something outside her/himself, or to examine his/her motivations or actions, or simply to refresh her/himself with Divine Energy. But for most people, "care of the soul" is probably not a daily matter--we (yes, I include myself in this group) may attend religious services weekly, but in between we may never utter a prayerful word, never ponder a divine thought. Yet we expect to make spiritual "progress"--to get closer to God--and become frustrated/angry when we don't!
Perhaps it's only human beings (OK, some humans!) who expect positive results to arise out of thin air. It would never cross a duck's mind to think (as much as a duck can "think," according to our definitions) to neglect its daily hour or two of self-examination. And if animals have souls (and there are many people who believe that they do), who's to say that the duck's preening or the cat's licking is not also a spiritual exercise, is not also a method of calming the spirit in order to permit a perception of the Divine?
Can those of us who neglect our daily spiritual grooming really say that we're the more "spiritual" species?
Posted by Anthony F. Chiffolo at 1:16 PM