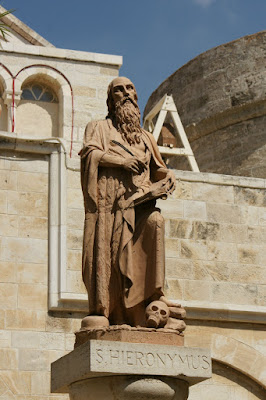 We just returned from a trip to the Holy Land (what an amazing experience!), with lots of photos and impressions to share. These first views are from Bethlehem, and I'm going to use them to "illustrate" advice that Padre Pio gave to one of his spiritual children. The statue above, located in the cloister of the Church of Saint Catherine, depicts Saint Jerome, labeled by his Latin name "Hieronymus." Padre Pio wrote this about Jerome in order to explain the necessity of reading "holy" books:
Now, if the reading of holy books has the power to convert worldly men into spiritual persons, how very powerful must not such reading be in leading spiritual men and women to greater perfection?
I deal with just one example here, namely, that of St. Jerome. He himself relates how he withdrew from the splendour of Rome and retired to Palestine, where he spent his days and nights in fasts and vigils, in prayer and harsh penances. Even in a life of such severity, he still had a fault which was very detrimental to his spiritual progress. This was his immoderate love for profane books and a certain repugnance for reading holy books because of what he considered to be the uncultured literary style in which they were written. As he himself admits, he saw a defect and a fault in the sun instead of recognizing a defect of his own eyesight.
A severe remedy was required to make him come to his senses. The Lord sent him an infirmity which reduced him to the point of death. When he was about to die the Lord carried him in spirit up to the Judgment Seat, where he was asked who he was. The saint replied: "I am a Christian and I profess no other faith than yours, O my Lord." "You are lying," replied the divine Judge, "you are a Ciceronian (the saint was very fond of Cicero's writings) for where your treasure is, there is your heart also." Then the divine Judge ordered him to be scourged. The pain of the blows caused the saint to weep and ask for mercy, crying out in a loud voice: "Have mercy on me, O Lord."
The Angels who stood before the Judgment Seat began to implore mercy for him, promising the divine Judge on his behalf that he would make amends for his fault. Then St. Jerome swore and promised with all the ardour of his soul that never again would he read secular and profane writings, but only holy books. At this point he returned to consciousness, to the astonishment of those present who had believed him dead.
The saint goes on to tell us that this was no vision or illusion, for when he came to himself his eyes were full of tears, his shoulders bruised and his flesh wounded from the severe blows he had received. After this event the saint gave himself up with great fervour to the reading of holy books which were of very great benefit to him.
--from Pio's letter to Raffaelina Cerase, July 28, 1914
Coincidentally, I was reading this letter yesterday, the same calendar day that Saint Pio wrote this advice and just three days after having visited the Cave of Saint Jerome in Bethlehem. (This rereading of Pio's letters is part of my research for two forthcoming publications: Lenten Meditations with Padre Pio and Lent and Easter Wisdom from Saint Pio of Pietrelcina.)
The following photo depicts the Cave of Saint Jerome, where, according to tradition, from 386 to 404 C.E. the saint worked on translating the Bible from Hebrew and Greek into Latin to produce the version known as the "Vulgate." 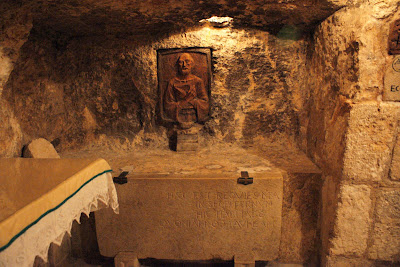 Jerome benefitted from the assistance of Saint Paula and her daughter Saint Eustochium, who with Jerome founded Christian monastic communities in the countryside around Bethlehem. This painting of the two women is located in the cave, across from Jerome's altar: 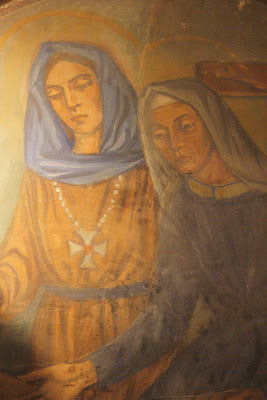 Here is a close-up view of the bas-relief of Jerome found above the altar: 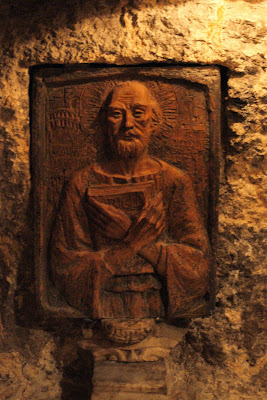 In another part of the cave is this altar that commemorates the angelic warning that prompted Saint Joseph to take Mary and Jesus to Egypt to escape Herod's slaying of the Holy Innocents. Jerome is said to have excavated a small passageway connecting this area with the Cave of the Nativity. 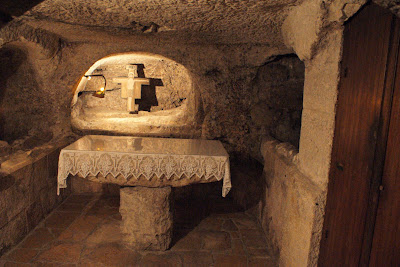 The Cave of Saint Jerome is located beneath the Church of Saint Catherine, a lovely church built on the site of a Crusader chapel. Above the entrance is a beautiful statue of the Blessed Mother: 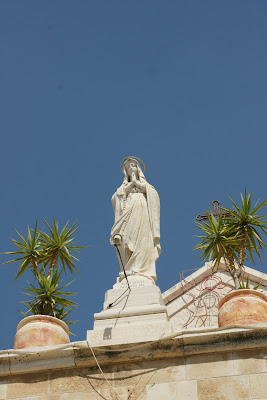 Visiting Bethlehem today is no longer as easy as it used to be. When I was there in 1983, a group of us just jumped in a taxi in Jerusalem and asked the driver to take us to the Church of the Nativity. After the Second Intifada of 2000-2002, however, Israel constructed the West Bank Barrier and has restricted travel to and from Bethlehem. It's now a little disconcerting to pass through the checkpoints and the security at the "wall," but the opportunity to visit the town of Jesus' birth was not to be missed, and this experience is one I'll never forget.

Lucky you! I would love to see the Cave of St. Jerome!