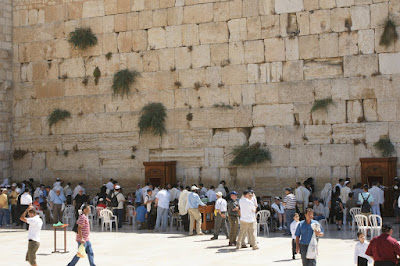 The Western Wall, also known informally as the "Wailing" Wall, is one of the "must visit" holy sites in Jerusalem. It is actually the remaining western wall of the Temple constructed by Herod the Great in about 20 B.C.E. and destroyed by the Romans in 70 C.E. Herod's magnificent edifice was an expansion of the Temple built when the Jews returned from exile in Babylon in the 6th century B.C.E., though both were known as the Second Temple. (In about 950 B.C.E., King Solomon had had the First Temple built at that same location to house the Ark of the Covenant; the Babylonians destroyed this structure when they conquered the Jews in 587 B.C.E.)
The site of the Temple, also known as Temple Mount because of its elevation above the rest of the city, is sacred to the three major monotheistic faiths. Tradition holds that Abraham prepared his son Isaac for sacrifice on this mountain. The Second Book of Samuel relates that King David erected an altar to God on Temple Mount. The Gospels tell that Jesus taught in the Temple and also overturned the moneychanging tables here. The Qu'ran indicates that the prophet Mohammed, on his winged steed Al-Burak, ascended into the heavens from this place.
Today, the Temple Mount is located in the Muslim Quarter of Jerusalem, but the Western Wall is located in the Jewish Quarter. The grounds of each are open to visitors at certain times of the week; however, political realities in the state of Israel and the Middle East can often intervene. For example, when I was in Jerusalem in 1983, I and my friends were able to go inside both the Dome of the Rock Mosque and El-Aqsa Mosque--to see the rock with Mohammed's footprint and the vast open prayer space, respectively--but we discovered during our recent trip that non-Muslims are no longer allowed inside either mosque, and non-Muslims are prohibited from entering the Temple Mount area from Thursday afternoon through Sunday morning. I consider myself fortunate to have been able to visit these holy places so long ago. (More about the mosques in a future blog.)
Strict Orthodox Jews believe that the Temple Mount is too sacred to walk upon because it was once the resting place of the Ark of the Covenant, so they have focused their worship/prayer-life on the Western Wall, which is outside/below the Temple Mount. The Western Wall is sometimes called the "Wailing" Wall because of the many prayers spoken or sung aloud there. It is at once a busy and serene place of worship and prayer. 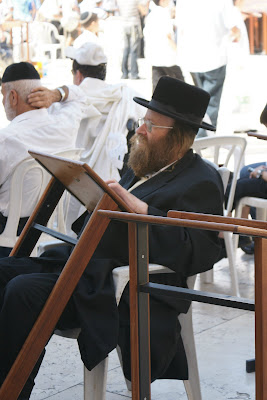 Men and women are separated at the Western Wall, with the women to the right in a smaller area. Many Orthodox Jewish men spend hours in prayer and reading as visitors come and go. Below is a pair of prayer books: 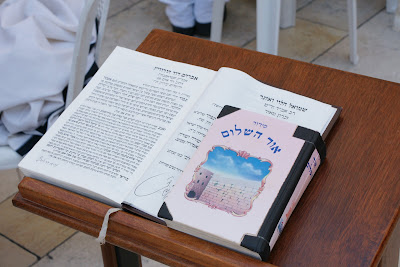 The bulk of the Wall is located outside, adjacent to a large plaza, but to the left inside an archway is a large room where some men pray or gather their thoughts. 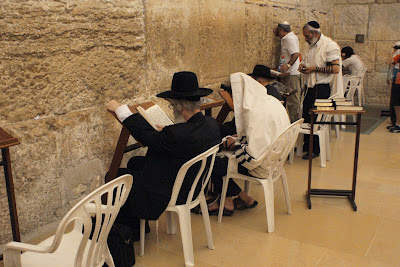 Jews and non-Jews alike approach the Western Wall with reverence. Having written a prayer or a request on a slip of paper, visitors will push the paper into a crack in the Wall, leaving their request in God's hands. 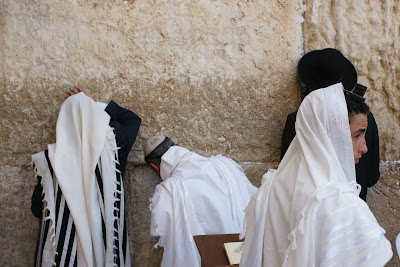 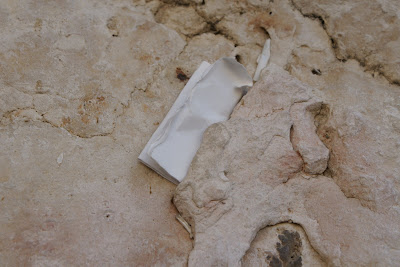 In the following photo, the men's area is to the left of the white umbrellas, while the women stay to the right, behind the barrier. This division applies to all visitors, whether Jewish or not. 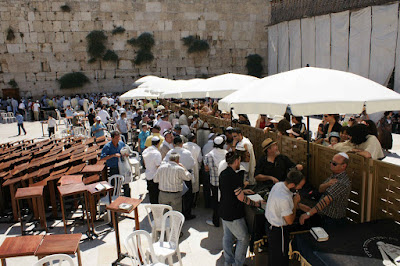 We visited the Western Wall on a Thursday morning, when families hold bar-mitzvah ceremonies. The boys and their families gather near the dividing fence, men on one side, women on the other, to hear their sons read their scripture passages. This ceremony marks a young man's "coming of age"--usually when 13 years old--the time when they become personally responsible for their actions. Families travel from all over Israel, and some from foreign lands, to hold a bar-mitzvah at the Western Wall. 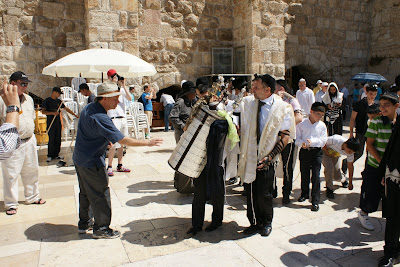 As part of their bar-mitzvah ceremony, the boys process with the scrolls. Sometimes the ornate scroll tabernacles are larger or heavier than the boys themselves! 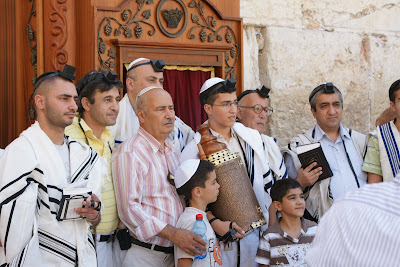 This model shows how the Temple might have looked during Herod's time. The Western Wall would be on the far side of this view: 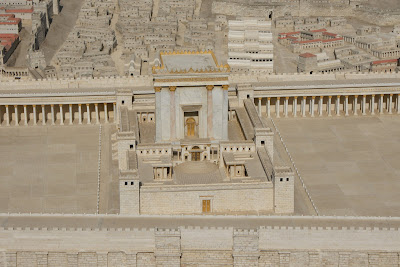 Reformed Jews who want to hold their son's bar-mitzvah in Jerusalem do so just outside the Western Wall courtyard, in an area below Robinson's Arch, the remains of a bridge that the high priests used to enter the Temple grounds, because women and men are not required to pray separately in this area. 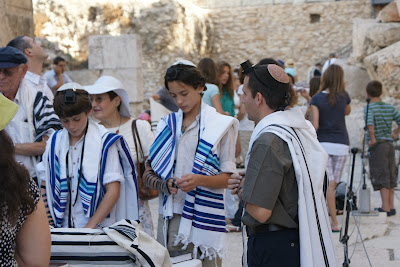 It is amazing to consider that the Temple Mount has been a holy site for more than 3 thousand years. Who knows how many people have gathered here to worship and pray over the millennia? 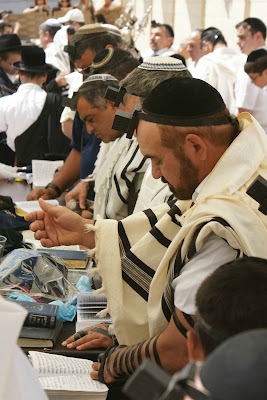 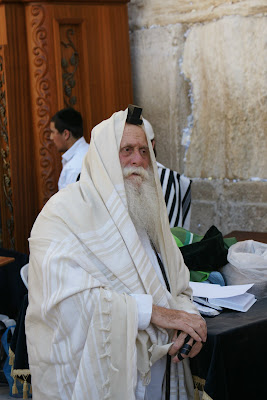 I recently came accross your blog and have been reading along. I thought I would leave my first comment. I don't know what to say except that I have enjoyed reading. Nice blog. I will keep visiting this blog very often.