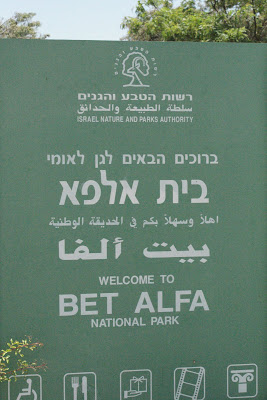 The ancient synagogue of Bet-Alpha is famous because its mosaic floor is one of the most beautiful ever discovered in Israel. It is large and very well preserved, still brightly colorful and quite striking, though the style is a bit “primitive,” indicating that a younger craftsman may have been the artist. 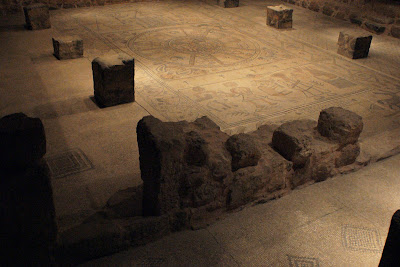 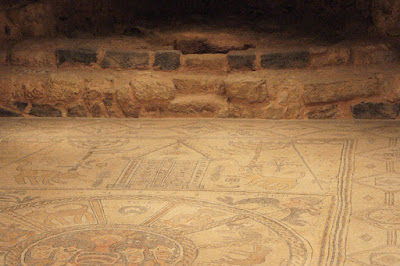 The central section of the mosaic is a depiction of the Zodiac, with the symbols of each of the months and their names in Aramaic and Hebrew. One can still see the two fish for Pisces, the scorpion for Scorpio, the bull for Taurus, and so forth. In the center of the Zodiac circle is Helios, the sun god, mounted in a chariot drawn by four horses. Outside the circle, at each corner of the compass, is a woman representing one of the seasons. 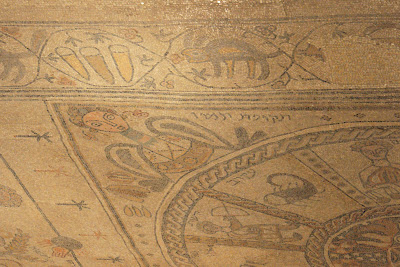 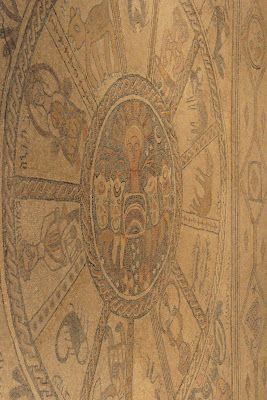 Above the Zodiac section is another wide panel that shows a collection of Jewish ritual objects: the Ark of the Covenant surrounded by lions, birds, and other animals, fruit, geometric designs, and a menorot (candelabra). This upper panel would have been closest to the area where the synagogue’s ark or sacred objects/scrolls would have been stored. 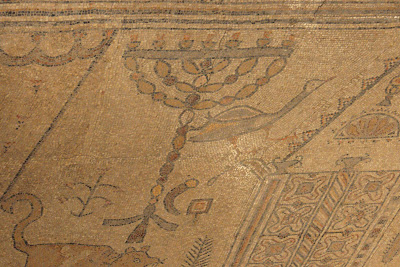 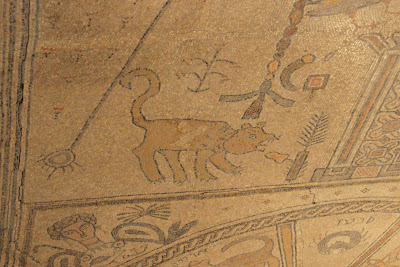 Below the central Zodiac section is a wide panel that tells the story of the near-sacrifice of Isaac by his father, Abraham, as recounted in the book of Genesis:
After all this, God tested Abraham. God said, "Abraham!"
"Yes?" answered Abraham. "I'm listening."
He said, "Take your dear son Isaac whom you love and go to the land of Moriah. Sacrifice him there as a burnt offering on one of the mountains that I'll point out to you." Abraham got up early in the morning and saddled his donkey. He took two of his young servants and his son Isaac. He had split wood for the burnt offering. He set out for the place God had directed him. On the third day he looked up and saw the place in the distance. Abraham told his two young servants, "Stay here with the donkey. The boy and I are going over there to worship; then we'll come back to you."
Abraham took the wood for the burnt offering and gave it to Isaac his son to carry. He carried the flint and the knife. The two of them went off together.
Isaac said to Abraham his father, "Father?"
"Yes, my son."
"We have flint and wood, but where's the sheep for the burnt offering?"
Abraham said, "Son, God will see to it that there's a sheep for the burnt offering." And they kept on walking together.
They arrived at the place to which God had directed him. Abraham built an altar. He laid out the wood. Then he tied up Isaac and laid him on the wood. Abraham reached out and took the knife to kill his son.
Just then an angel of God called to him out of Heaven, "Abraham! Abraham!"
"Yes, I'm listening."
"Don't lay a hand on that boy! Don't touch him! Now I know how fearlessly you fear God; you didn't hesitate to place your son, your dear son, on the altar for me."
Abraham looked up. He saw a ram caught by its horns in the thicket. Abraham took the ram and sacrificed it as a burnt offering instead of his son.
Abraham named that place God-Yireh (God-Sees-to-It). That's where we get the saying, "On the mountain of God, he sees to it."
The angel of God spoke from Heaven a second time to Abraham: "I swear—God's sure word!—because you have gone through with this, and have not refused to give me your son, your dear, dear son, I'll bless you—oh, how I'll bless you! And I'll make sure that your children flourish—like stars in the sky! like sand on the beaches! And your descendants will defeat their enemies. All nations on Earth will find themselves blessed through your descendants because you obeyed me."
Then Abraham went back to his young servants. They got things together and returned to Beersheba. Abraham settled down in Beersheba. (Genesis 22:1-19, The Message) 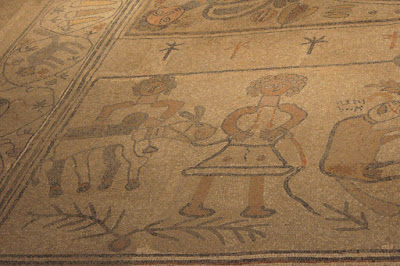 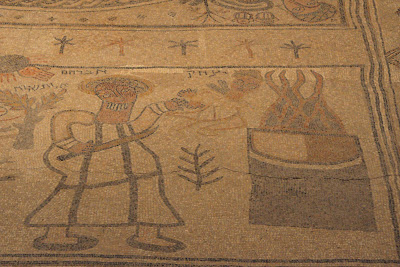 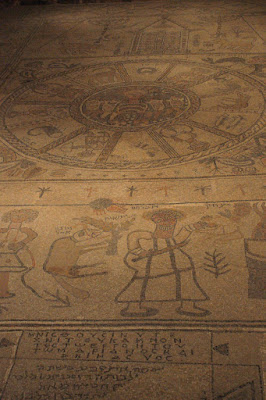 There are two inscriptions near the mosaic. The first, in Greek, reads, “The well remembered artists who carried out this work Marianus and his son Hanina.” The second, in Aramaic, states, “The Mosaic was laid in the year … of the reign of Emperor Justinus for the price of one hundred measures of gain donated by the villagers.” Justinus reigned 515-528 C.E., so the inscription helps date the structure to the sixth century. 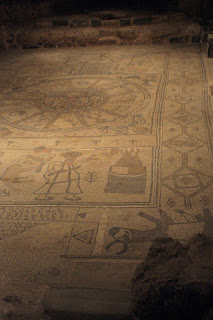 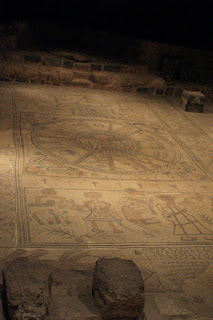 One each side of the mosaic are the remains of a row of three pillars, which separated the main floor area from the areas set aside for more private prayer. Benches would have been located against the outer walls. The synagogue is aligned to the southwest, facing Jerusalem, which is about 60 kilometers away. 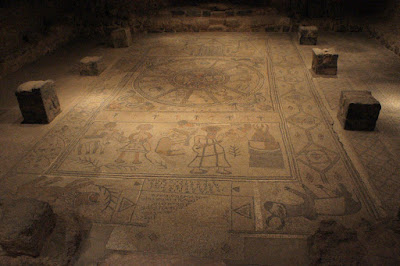 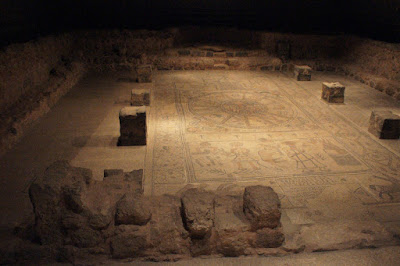 Archaeologists believe that an earthquake destroyed the synagogue at the end of the sixth century and that it remained hidden until discovered by members of the kibbutzim Bet-Alpha and Hefzi-Ba in 1928. It was excavated by the Hebrew University of Jerusalem in 1929.
The wonderful mosaic is now protected from the elements; tourists can view it from a raised platform in the darkened room; the site of the synagogue has been partially reconstructed and is now a national park. 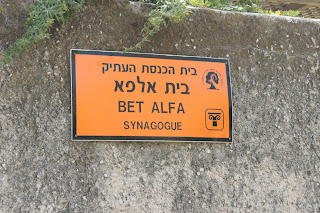