Dome of the Rock and El-Aqsa Mosque

With apologies in advance for the "edge" in the tone of this entry, I would like to mention the mosques of Jerusalem.


Unfortunately, our 2008 visit to Israel did not include any Muslim sites. Indeed, our tour had a distinctive Zionist flavor from start to finish. So we did not get the chance to visit either the Dome of the Rock or the El-Aqsa Mosque—we were not even granted the opportunity to walk the surrounding grounds of the mosques, which now occupy Jerusalem’s Temple Mount, the large plateau where King David and King Solomon had constructed the First Temple, and where King Herod had constructed the Second Temple. (For more historical details, please see my blog on the Wailing Wall.)


From the Mount of Olives, a viewpoint overlooking the entire city of Jerusalem, one can see the prominence of the Dome of the Rock in the Jerusalem skyline: 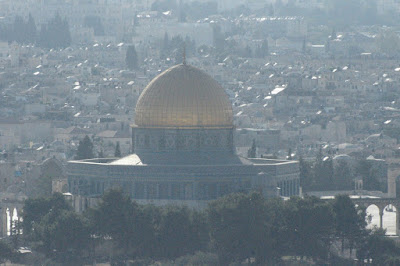 The Dome of the Rock is a most impressive structure, perhaps the most impressive and recognizable in all of Jerusalem. Surmounted by a golden dome, it is decorated in exquisite mosaics/tiles over its entire exterior. A place for private prayer and reflection, it was constructed in 692 C.E. by Abd-al-Malik. Within is the exposed rock at the summit of Mount Moriah, where tradition indicates that Abraham prepared to sacrifice his son Isaac and where, again according to tradition, Mohammed is said to have placed his foot as he ascended to heaven.
The Mosque of El-Aqsa was built in the 11th century C.E. as a place of worship: there is room on the floor for about 4,000 persons to prostrate themselves in prayer on the exquisite Turkish carpets. The name means “the farthest,” meaning farthest from the holy city of Mecca. The interior space is very large: 75 columns and pillars support the roof; there are 42 clerestory windows of contemporary stained glass. 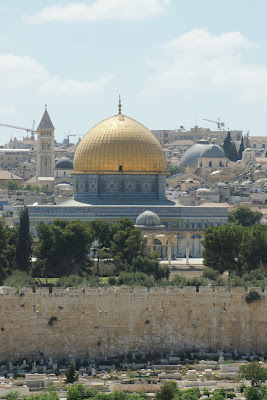 When I was in Jerusalem in 1983, I was able to visit both El-Aqsa and the Dome of the Rock. Leaving shoes and cameras outside, my shipmates (this was during a port visit to Israel, when I was in the navy) and I first entered the vast worship space of El-Aqsa—the sense of space is literally breathtaking. Then we toured the Dome of the Rock, seeing Mohammed’s “footprint” in the bedrock of Mount Moriah, viewing the hair from his beard in the shrine, visiting the sacred cave below, and in general marveling at the artistry of the decorations. It was, as they say, an awesome experience.
Unfortunately, during our summer 2008 trip, Rusty and I were not able to visit these mosques. Since the establishment of the Palestinian Authority, entry to the Muslim sites is forbidden to all except practicing Muslims. But even more unfortunately, our tour did not even schedule a time for us to visit the grounds and view the exteriors of the mosques: entry to all except Muslims is prohibited from Thursday afternoons until Sunday mornings, and guards (Israeli? Palestinian?) are stationed at all the entrances to the Temple Mount to keep non-Muslims out. So the best we could do was to stand at the end of the alleyway and view the Dome of the Rock from afar. Here’s what we could see (via a zoom lens): 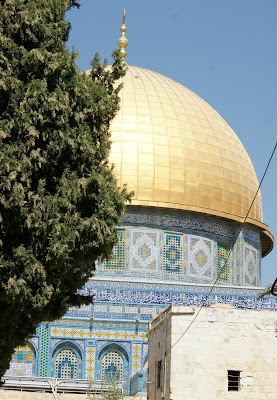 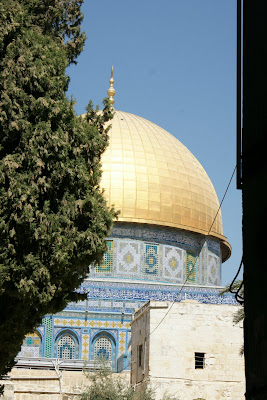 We could see the mosques from the Garden of Gethsemane area (again, these photos were taken with a zoom lens, and enlarged by means of the computer): 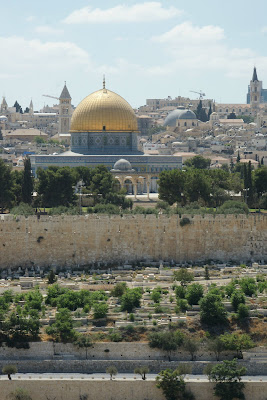 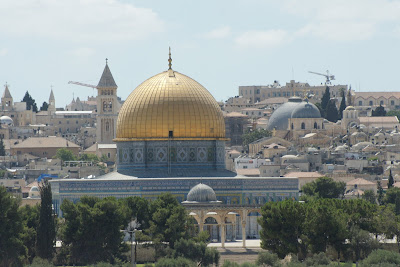 You can see some of the exquisite detail of the exterior. 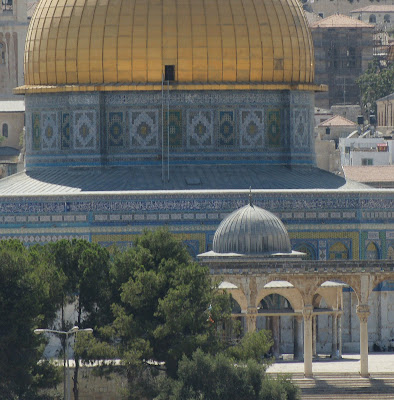 And from the Citadel (the Tower of David), adjacent to the Jaffa Gate (the Garden of Gethsemane area is in the background, just below the Orthodox church with the onion domes): 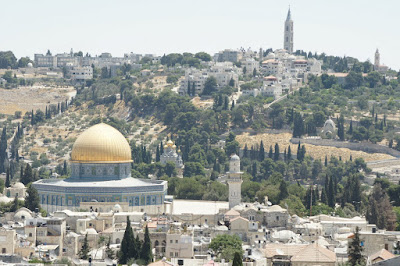 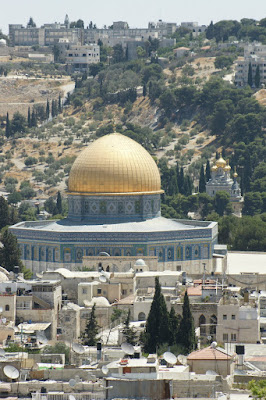 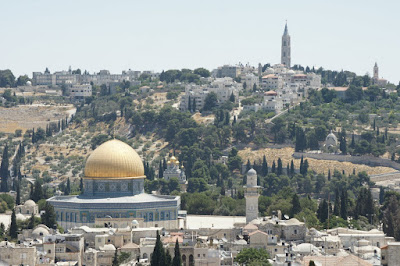 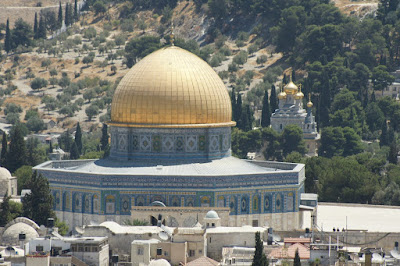 The gray dome of El-Aqsa Mosque is on the right (below): 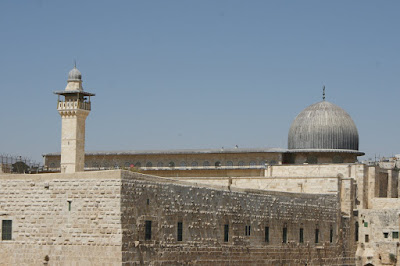 As we approached the Wailing Wall from outside the city, we were able to see the mosque, as below: 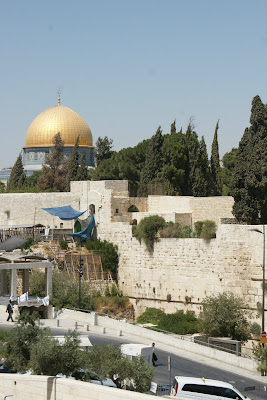 I really wanted to show Rusty these gorgeous buildings—they are truly exquisite artistically—so I was quite disappointed that our tour did not include them on our itinerary, perhaps even more disappointed than he was.
Here’s what I was able to see in 1983. First, a view from the Garden of Gethsemane: 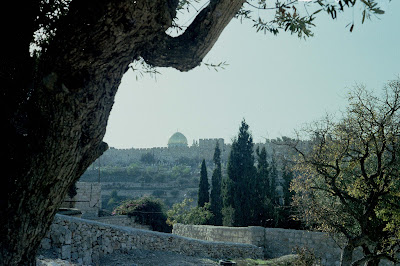 These next views were taken on the grounds of the mosques, atop Temple Mount. Note the visitors. 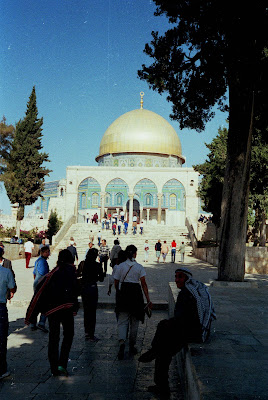 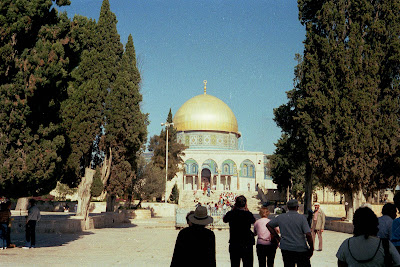 When I took these photos in 1983, I was not using a zoom lens, and I did not enlarge these shots on the computer. 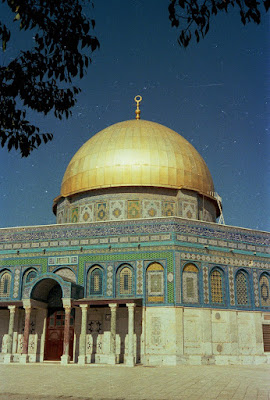 The colors of my photos have faded a bit in 25 years, but one can still see how spectacular these buildings are. 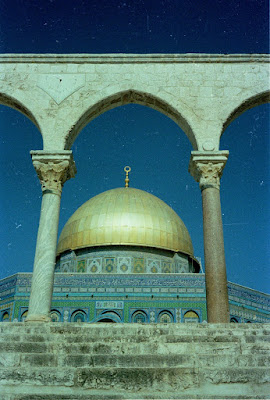 Perhaps when people in this area learn to co-exist peacefully, we will not be excluded from enjoying the best that human culture of any flavor has created.