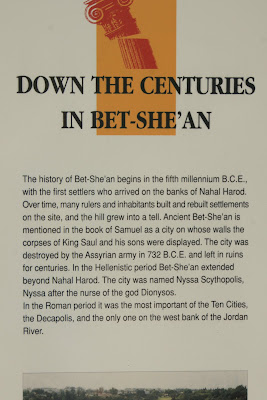 Bet She’an is the site of the remains of a splendid city. Located about 60 kilometers north-northeast of Jerusalem, it covers an area of about 400 acres and features an imposing view of Jordan from the top of a high hill. It was extremely hot and dry when we were there, though it was easy to imagine how pleasant and pretty it would be during the rainy season. 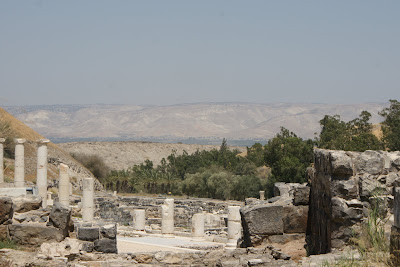 This land was probably first settled about seven thousand years ago—it is a fertile area, close to the Jordan River, and was crossed by the major trading route. About 4,500 years ago, during the Late Canaanite period, the Egyptians conquered the land and made this city their power center. King Saul and his sons were unable to lead the Israelites in victory over the Canaanites in the battle at Mount Gilboa, and the Philistines hung their bodies from the walls of Bet She’an as a warning (see Scripture). Not long afterward, however, King David was able to conquer Bet She’an and make it part of his united kingdom of Israel, and King Solomon made this city an administrative center. 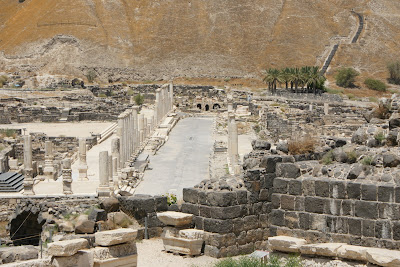 When the Assyrians under King Tiglat-Pilesser III invaded in 732 B.C.E., they destroyed the city, and the area remained unsettled until the [followers of Alexander the Great]Greeks built Nysa-Scythopolis on this spot. The Hasmoneans conquered the area in the second century B.C.E., and the city became predominantly Jewish. But when the Romans conquered Judea in 63 B.C.E., the city took on an entirely new look and became the most important city in the north, with magnificent public buildings, a theater, a long boulevard, and many adornments. 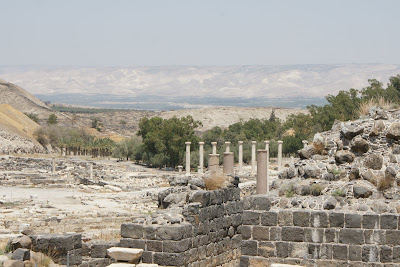 During the Byzantine era, the population of Bet-She’an swelled to 40,000 persons, primarily Christian; a wall was constructed, along with many churches and monasteries. The city declined after the Arab conquest. The earthquake of 749 C.E. practically destroyed the city; it became known as Beisan and became more of a rural village than the thriving metropolis it had once been. It remained small and unimportant through the Abbassid period, the Middle Ages, the Crusader period, and the Ottoman era. 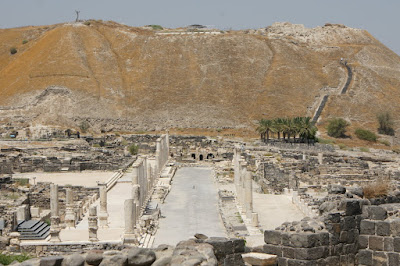 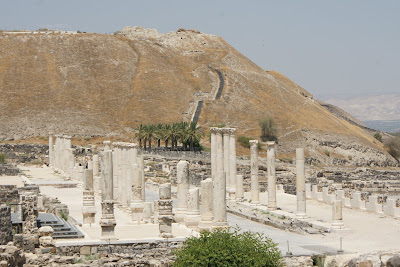 “Rediscovered” at the beginning of the 20th century, Bet She’an has become a vast archaeological site, though only about 10 percent of the city has been uncovered. Excavations are ongoing, and archaeologists continue to learn much about ancient life in the Middle East. 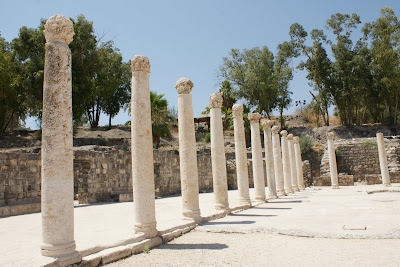 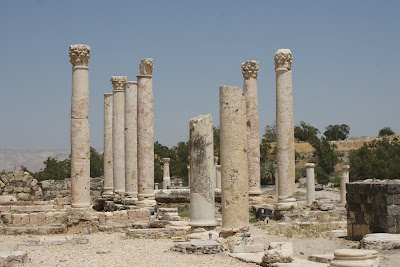 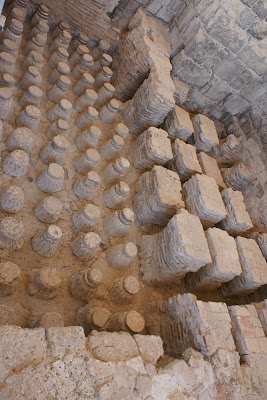 Public lavatories were built adjacent to the bathhouses and near the theater, for the use of visitors. One can still see the channels where the waters would have flowed. 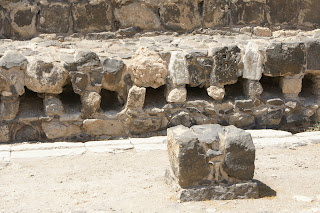 These mosaics were located alongside the bathhouse, but also quite near the site of the synagogue: 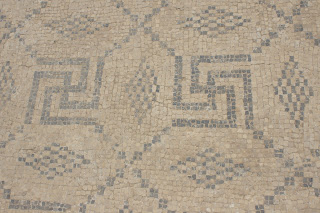 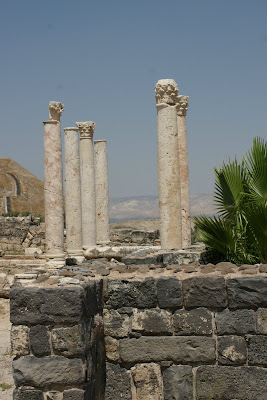 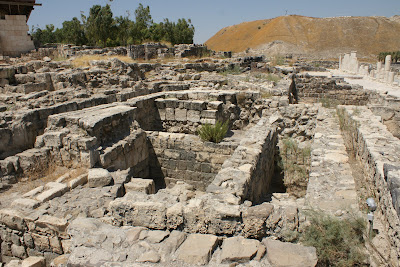 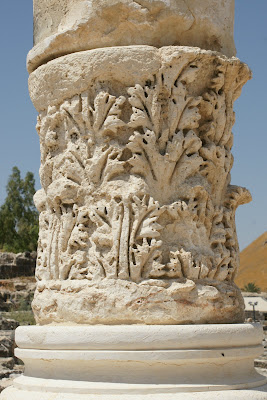 Known as “Palladius Street,” the main boulevard is 150 meters long and extends from the theater to the slopes of the Tel. The street dates from the Roman period but was renovated by the Byzantine inhabitants. In its day, shops lined the street. The date of the boulevard’s construction is known because of an inscription that indicates the portico to have been built during the time of Palladius, governor of the province. 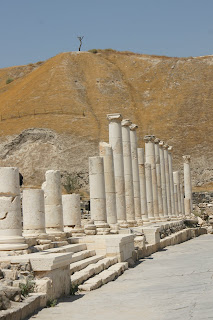 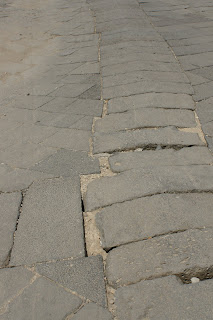 Along Palladius Street is a concourse from the Byzantine era that is referred to as the Sigma. Brilliant mosaics decorated this concourse, some of which are nicely preserved. There are plant and animal motifs, geometric designs, and inscriptions: 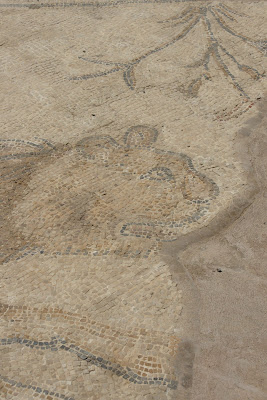 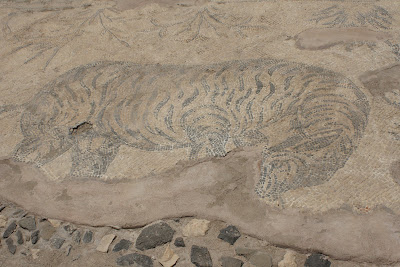 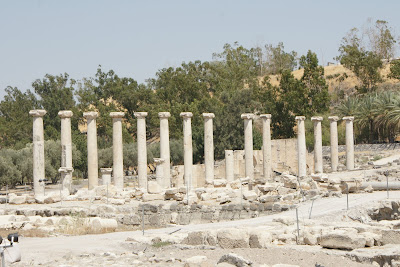 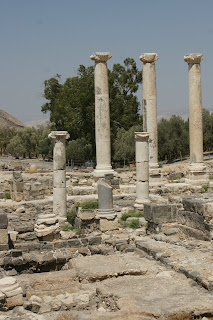 In the 2nd century C.E., the Romans built a hippodrome outside the city for horse and chariot racing. During the 4th century, this hippodrome was converted into the theater whose ruins are now visible. This theater originally held about 6,000 spectators and was a venue mostly for hunting displays and other entertainments. The Crusaders removed much of the stonework from the theater when they constructed their nearby fortress, so only about three rows remain of the original seating. Archaeologists have been reconstructing the site in order to provide an educational experience for modern visitors. 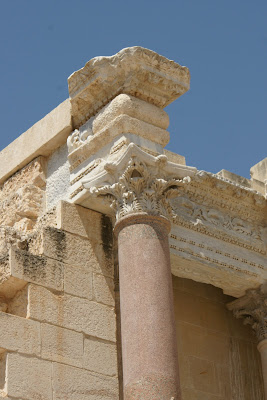 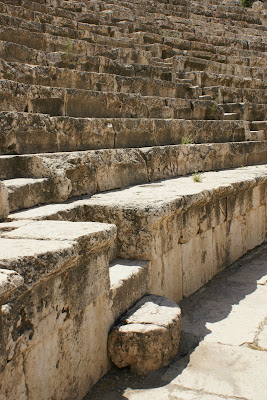 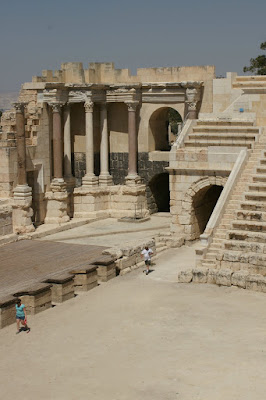 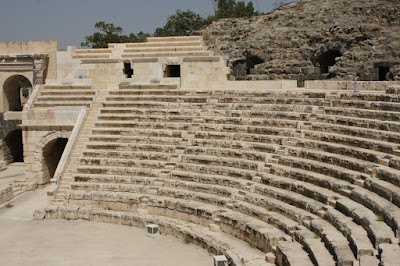 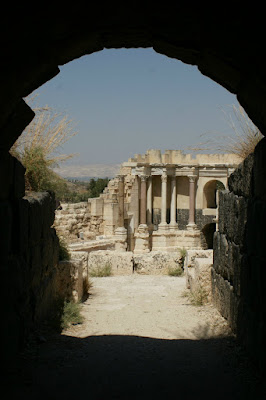 Bet She’an is a really spectacular place, and the size alone is monumental. What is perhaps most interesting is the way that the city was built over a village that had been built over a trading center that had been built over a settlement. Each new conqueror or owner “borrowed” building materials from the existing structures to construct new buildings, streets, shops, houses, and over time much earth and debris filled in the older habitations as the new literally rose above the old. This is why modern archaeologists spend so much time digging down through layers upon layers, going back in time as they go deeper into the ground. It is fascinating what one can learn just by seeing where people used to live. 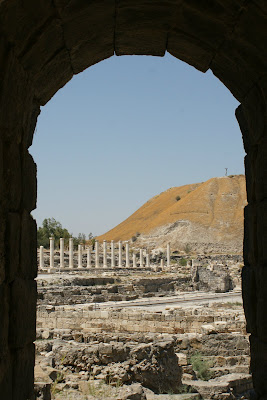 I love those mosaic pictures! They will be good inspiration for my next few mosaic projects.
And let me know if you need a baggage boy on your next trip. :)