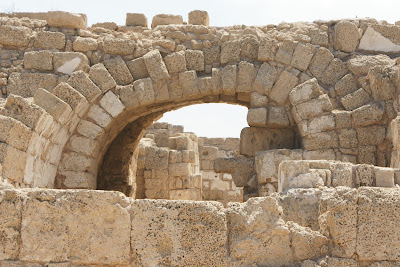 Located about 30 miles north of Tel Aviv and 20 miles south of Haifa, Caesarea was once a substantial and important Mediterranean seaport. It was also the provincial headquarters of Roman administration and the residence of Pontius Pilate, the Roman procurator.

The site was used as an anchorage since the 4th century B.C.E., but it was not extensively developed until Caesar Augustus presented it to Herod the Great in 30 B.C.E. Herod embarked on an ambitious building program and named the city Caesarea Maritima in honor of the emperor. Among the construction activities: an artificial harbor that provided anchorage for more than 100 ships; a large theater; a hippodrome; an amphitheater; a temple to Augustus; a main thoroughfare 18 feet wide; even a sewage system flushed by seawater. 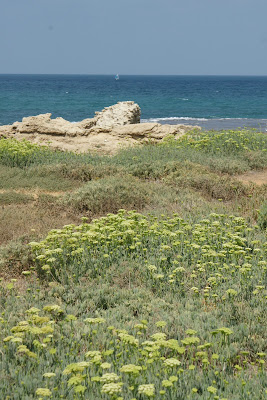 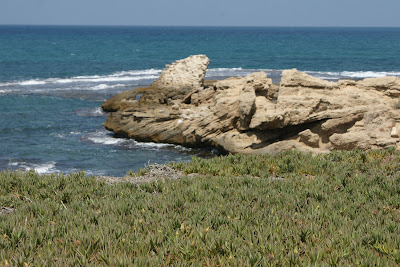 In the 3rd century C.E. the writer Origen founded a Christian library and center of learning in Caesarea. Eusebius, one of Origen’s pupils, became bishop here in 314. At the height of the Byzantine Period the city rivaled Jerusalem in size. 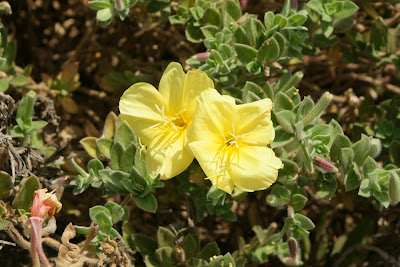 Muslims captured Caesarea in 640 but did not make much use of it. The Crusaders began some rebuilding when they took the town in 1101, but they lost it to Saladin in 1187. In 1251 the French king Louis IX financed some reconstruction, but when the French Crusaders were expelled after just a few years, Caesarea was destroyed, and it remained unoccupied until 1878, at which time the Turks permitted reinhabitation of the site by refugees from Bosnia. This community abandoned the city in 1948 upon the establishment of the state of Israel. Only recently have excavations been started and the site developed into a tourist attraction.

The first stop on our tour to Caesarea was the theater, which can seat 4,000 persons; at the time of our visit, the stage was being set up for a concert that evening. 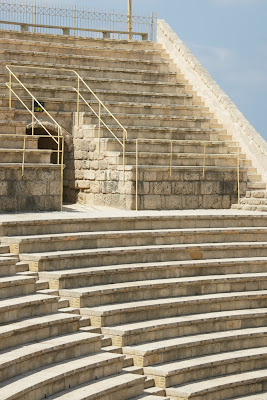 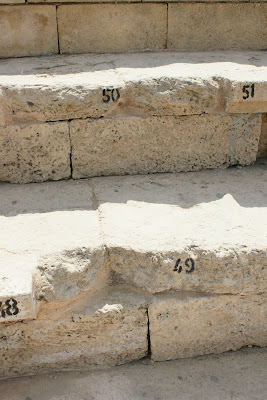 At the entrance to the theater were these sculptures, including this carved foot; one of the stones found here bore a Latin inscription that said, “Pontius Pilate, Prefect of Judea, made and dedicated the Tiberieum to the Divine Augustus”—this is important archaeological confirmation of the gospel accounts.

Our next stop was the palace area, where Herod had constructed a fine bath—actually, what appeared to be an enormous saltwater swimming pool! Nearby are the ruins of the temple (below right) that he built to honor the emperor. 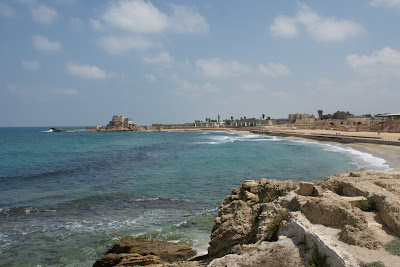 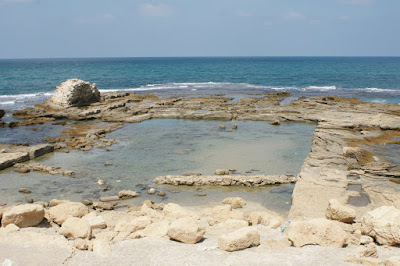 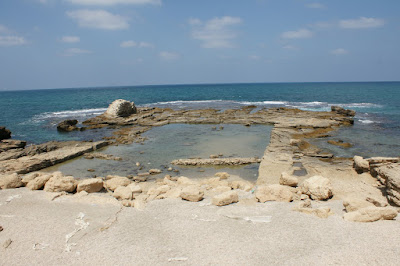 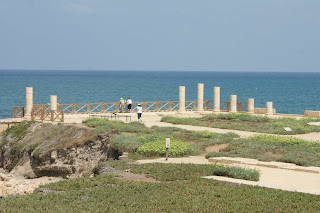 The hippodrome (below), just inland from the bath, is an enormous arena where chariot and horse races were held. 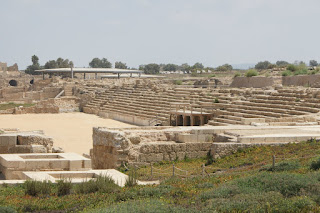 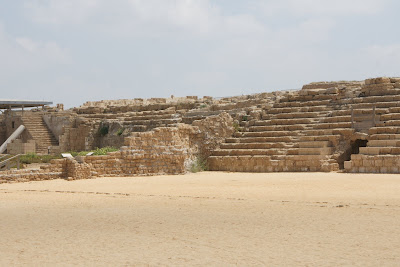 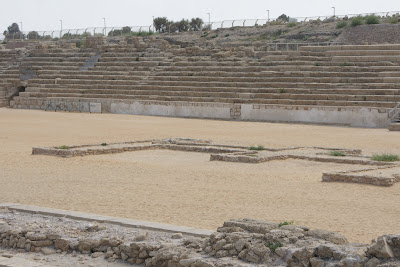 As at most of the historic sites, there are some very fine mosaic floors in Caesarea. 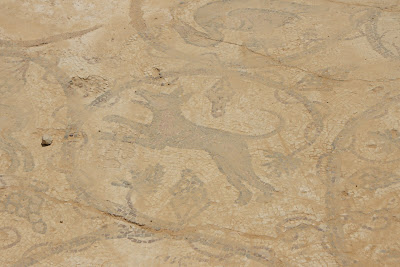 This room is among the remains of some of the Crusader constructions, part of either a small chapel or a fortress. 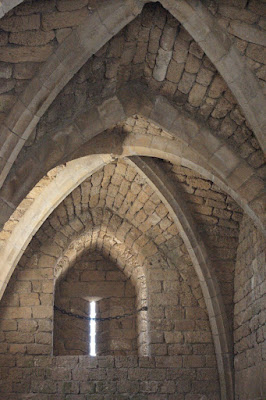 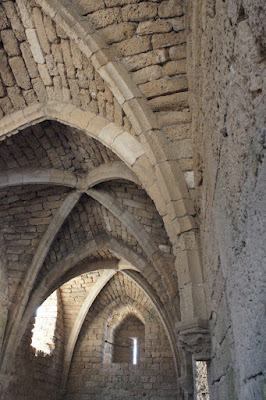 Close by are these very fine statues, which were recently excavated. They are part of a Byzantine street and date from the 2nd or 3rd century C.E. These statues are quite impressive in execution and very large; the darker one is thought to depict Roman Emperor Hadrian and to have been carved in Egypt. 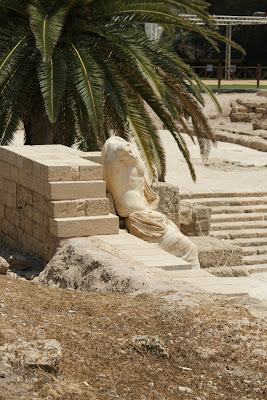 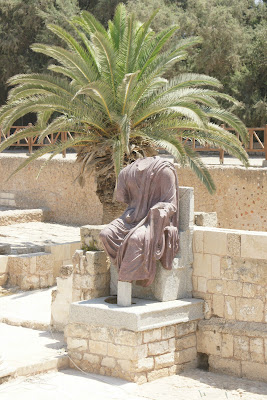 Not far away is the Roman aqueduct that supplied fresh water to Caesarea from Mount Carmel more than 12 miles away. The aqueduct was built of limestone, which is very porous, so the water channels were plastered to keep the water from seeping out. The portion of the aqueduct that we viewed, at the shore, was built at the beginning of the 2nd century C.E. under Hadrian’s rule (76-138 C.E.). It is now quite picturesque. 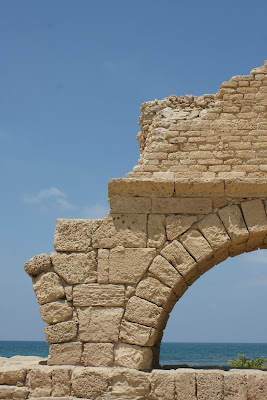 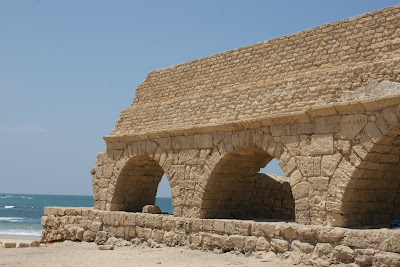 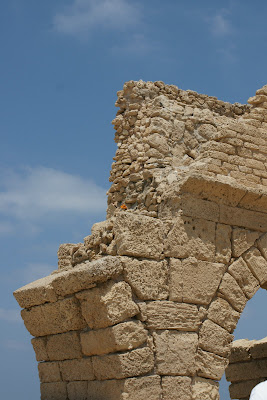 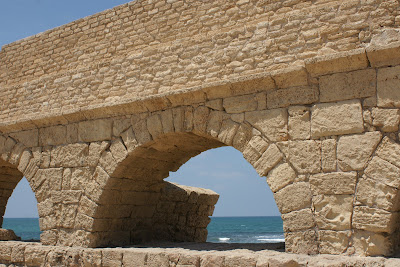 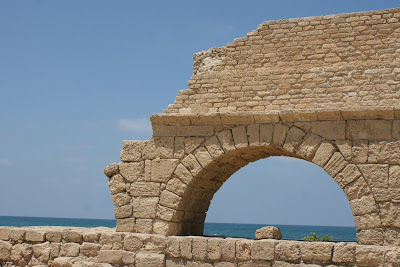 Caesarea is an important Christian site because it was here that Saint Peter baptized Cornelius, a Roman centurion, the first gentile to convert to belief in Christ. Saint Paul was also imprisoned in Caesarea for two years before being sent to trial in Rome. See Acts 8:40, Acts 10, Acts 21:8ff, and Acts 23-26 for references to Caesarea. 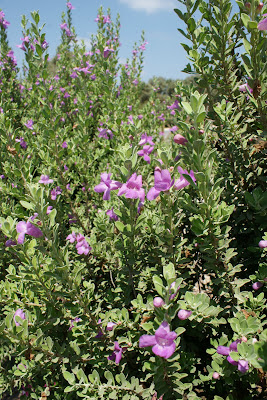